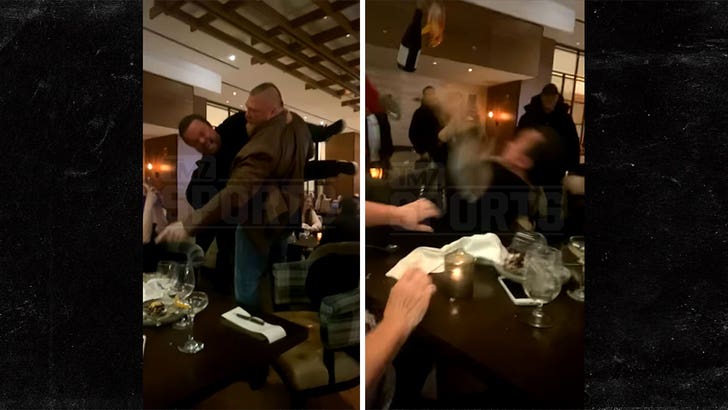 File this under warming up for Bobby Lashley … ’cause on the eve of the Royal Rumble, WWE Superstar Brock Lesnar just BODYSLAMMED Wee Man through a table — at dinner!!

TMZ Sports obtained video from Lesnar’s dinner table at a restaurant in St. Louis when the 6’3″, 285-ish lb. behemoth picked up the Jackass star — as Johnny Knoxville (who’s in the RR) watched — and sent him crashing through the wood table, breaking glass (and possibly Wee Man’s back?).

The clip’s great … the future WWE HOF’er casually picks him up, holds him, and then … boom!

Of course, Brock — the WWE Champion — is in Missouri for the Royal Rumble … where he’s taking on the challenger, Lashley, Saturday night at The Dome at America’s Center.

Lesnar and Lashley isn’t the only big time matchup. Roman Reigns is wrestling Seth Rollins, Becky Lynch vs. Doudrop is also going down … and there’s a bunch of other Superstars scheduled to be in the house.